The City of Arvada Public Works department is working on a new project to help reduce speeding along Grandview Avenue between Independence Street and Olde Wadsworth Blvd.

In 2020, the City completed the W. 57th Avenue Multi-modal Study, which included recommendations to improve biking and walking along the corridor, as well as ways to reduce speeding. City staff presented the results of the study to City Council, and Council members directed staff to evaluate and develop a similar traffic calming plan for Grandview Avenue before implementing any changes to W. 57th Avenue. City Council also directed staff for implementation along both corridors to happen at the same time, so as not to negatively impact residents along either street.

City staff collected speed and volume data at six different locations along the corridor and developed a plan to reduce speeding based on this information. The proposed plan will be implemented over time, with a six-month pilot project timeframe for two traffic calming devices along the corridor. The results of that pilot project will help determine the next steps for the traffic calming plan. The current pilot project proposal includes one speed cushion and the option to test one speed hump as well.

What is traffic calming?

"The primary purpose of traffic calming is to support the livability and vitality of residential and commercial areas through improvements in non-motorist safety, mobility, and comfort. These objectives are typically achieved by reducing vehicle speeds or volumes on a single street or a street network. Traffic calming measures consist of horizontal, vertical, lane narrowing, roadside, and other features that use self-enforcing physical or psycho-perception means to produce desired effects."

The hosted a public meeting to discuss this project on Tuesday, April 13, 2021 over zoom. A recording is available in the video panel on the right side of this page.

You can view past engagement opportunities on SpeakUp.Arvada.org. 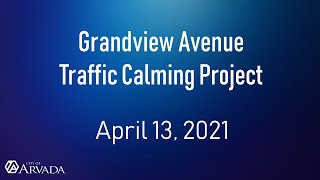