On Thursday, May 19, at 8 a.m. APD will hold its annual Fallen Heroes honor watch and wreath ceremony. After the ceremony, the Honor Guard conducts a ceremonial watched over the wreath until 12 p.m. with a changing of the guard every 20 minutes. Residents, businesses and other community members are invited to attend. It will be held outside Arvada City Hall (8101 Ralston Rd.).

National Police Week occurs every May, and in 2022, will be commemorated with live, in-person events during the week of May 11–17. The National Law Enforcement Memorial and Museum in Washington D.C. will hold ceremonies, including the 34th Annual Candlelight Vigil, to honor the fallen officers whose names have recently been added to the Memorial.

This year, members of the Arvada Police Department and the family of Officer Gordon Beesley will travel to Washington for the ceremonies, as Gordon's name will be added to the memorial. For updates, follow APD and COA on our social media channels: https://arvada.org/find-us-online.

National Law Enforcement Week was established in 1962. Events across the country honor those who paid the ultimate sacrifice.

Arvada PD holds an honor watch and wreath ceremony on a designated morning each May in recognition of Arvada Police officers killed in the line of duty. After the ceremony, the Honor Guard conducts a ceremonial watched over the wreath until 12 p.m., with a changing of the guard every 20 minutes. 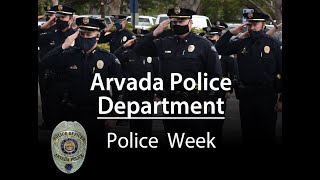