The ceremony was led by Gregory A. Miller, President of American Hiking Society and National Trails Day Founder, and featured remarks from Governor Hickenlooper, Congressman Ed Perlmutter, Former Secretary of Interior Ken Salazar, elected officials representing the Cities of Arvada and Westminster, the City and County of Broomfield, and Jefferson County, as well as leaders of the US Fish and Wildlife Service and Federal Highway Administration.

About the Greenway Trail

This regional trail is divided into various phases, some of which are built and some of which are just beginning to be studied. The phase linking Two Ponds NWR to Rocky Flats NWR features an alignment through Arvada and was constructed between January - June, 2016. Within Arvada, the trail consists of:

Project design and coordination was undertaken by the Central Federal Lands Highway Division (CFL) of the Federal Highway Administration.  A Steering Committee and a broad range of State, county, municipal, and private agencies including the cities of Arvada, Westminster, the City and County of Broomfield, ditch companies, US Fish and Wildlife Service, and CFL have guided project development since 2012.

A Federal grant funded construction of the "refuge to Refuge Connector" in Arvada, Westminster and Broomfield.  For more information about the Rocky Mountain Greenway: 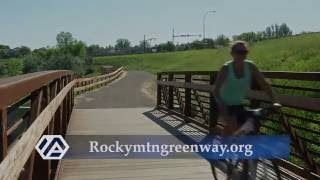