Water Tower in Olde Town Gets a Facelift

Arvada, CO . . . At 106 years of age, the Olde Town Arvada Water Tower is looking quite sprightly, presiding over an historic district that has been undergoing a dramatic revitalization. Still, this grand icon of Arvada, exposed to more than a century’s worth of sun, wind, rain, snow, and the occasional lightning strike, needs a facelift every once in a while. And so, in anticipation of the opening of the G Line commuter rail line later this year which includes a stop in Olde Town Arvada,  the Olde Town Water Tower is getting gussied up.

Beginning this week, Coblaco Services, Inc. is on site, preparing the Tower for a fresh coat of paint.

History of the Water Tower

In 1910, six years after Arvada incorporated, the Town Board worked to find a solution to chronic water shortages.  Two wells were drilled south of Grandview Avenue, providing artesian water which was then pumped into the newly constructed tower which stood 150 feet above ground, supported by steel trestles. The Arvada Water Tower was the first of its kind in the area.  A celebration was held on October 12, 1910, attended by Colorado Governor John Shaftroth and Denver Mayor Robert Speer.

The Water Tower was decommissioned in 1977 after serving Arvada residents for 67 years. However, the Arvada City Council recognized the historical significance of the structure and chose to preserve it, painting the words “Olde Town Arvada” on the tank.  In 2003, as the Olde Town area was in the midst of a revitalization and the Water Tower Village development was developed in the shadows of the Tower, the Tower received a major facelift with new paint and lettering that matched the City’s brand.

Ultraviolet rays have significantly faded the paint on the Tower; in addition, some of the structural elements including the legs and platform require attention. The City of Arvada issued a Request for Proposals and chose Coblaco Services, Inc. to do the following work:

Coblaco Services, Inc. is an industrial blasting and painting company established in 1978.  Headquartered in Aurora, Coblaco has completed projects throughout the United States, stretching from Florida to Alaska. 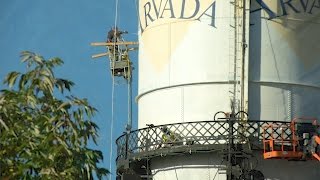 More About the Water Tower