Arvada's City Manager is Lorie Gillis, who began serving in the role on Oct. 7, 2022. Prior to her role as City Manager, Ms. Gillis had served as the Deputy City Manager since 2014. She has also held roles with Jefferson County Schools as Chief Financial Officer (2004-2014) and Executive Director Budget Management and Development (2002-2004); and the City of Golden as the Director of Finance and Administration (1996-2002). Ms. Gillis has a Bachelor’s Degree from Colorado State University in Business Administration, a Master’s Degree in Organizational Leadership - Applied Business Management from Colorado State University Global Campus, and most recently attended John F. Kennedy School of Government at Harvard University, Executive Education, where she was awarded a certificate of completion for the Senior Executives in State and Local Government. 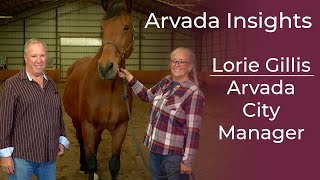