Newly elected to the Arvada City Council in November 2021, Lisa’s goal is to build stronger connections and greater engagement between residents and the City of Arvada. With a focus on housing and multi-modal transportation, Lisa hopes to ensure the needs of Arvada residents are met by listening to and advocating for her constituents.

Lisa moved west from Connecticut in 2007 by way of the military, serving in the United States Air Force as a policewoman. She hung up her beret in 2010 to attend Colorado State University in Fort Collins, and also worked there as a social worker. She quickly realized the importance of housing and community work to help elevate people out of poverty towards self sustainability and launched programs including nursing home reintegration, home sharing and community-based resource programs. In 2016, she returned briefly to the east coast to attend graduate school for social work and policy at Boston College. She served in the Boston Mayor's Office piloting new programs around housing, students and vulnerable populations.

Lisa currently works for Team Rubicon, a veteran disaster response organization that deploys people to crisis and emergencies across the globe. Her first deployment was in Colorado during the floods in 2013, followed by deployments in a refugee camp in Greece, supporting a deadly earthquake in Nepal as well as numerous state-side deployments to fires, floods and hurricanes. She has been working and volunteering in the disaster response space for almost a decade. This included COVID response in Arvada where she served on the Arvada Chamber Resiliency Task Force and helped distribute hundreds of gallons of sanitizer and personal protective equipment.

Lisa has served older adults, low income, disabled persons and veterans during her time in both the government and nonprofit sectors. With a passion for immersing herself in the community through volunteerism, boards, committees and clubs, Lisa is currently a member of or volunteer for:

Lisa comes from a large family of Irish, Italian and Argentine heritage. Her mother immigrated from Argentina and became a tri-lingual public school teacher. Her father was a school social worker and hospital therapist. Lisa is married to Eli Feret, a West Point graduate and former Infantry Officer. They met in 2014 volunteering in Colorado. They enjoy skiing together and fostering dogs in their home. When they are not working or volunteering, they can be found traveling and exploring other cultures. After their many years serving in the Air Force and Army, Lisa and Eli are excited to call Arvada home. 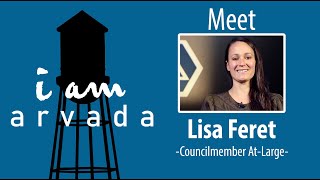