As a member of the Arvada City Council, Lauren Simpson is committed to working on issues for which she campaigned: fighting for affordable housing options, promoting local Arvada businesses and workers, and protecting our shared public spaces while “place-making” new ones for residents and visitors to enjoy. Lauren also seeks to be a voice for Arvada’s families and an advocate for her constituents in need.

Born and raised in rural Texas, Lauren earned a Bachelor’s with Honors at Baylor University and then moved to Washington, D.C., where she earned a Master’s degree in International Relations from Catholic University. Lauren’s career began with internships at the U.S. House of Representatives Foreign Relations Committee and the United Nations, before she advanced within institutions such as the Pew Charitable Trusts and Ogilvy Worldwide.

In the pre-COVID days, Lauren would take (and hopes to again one day!) the G Line downtown to her day job, serving as a senior foreign policy and diplomatic officer for the Government of Canada in the U.S. Mountain West Region. Her work is focused on promoting U.S.-Canada bilateral relations at the regional, state and municipal levels.

In addition to her professional role, Lauren has taken on several other roles to help the local community — from board service to youth mentorship. She is an active member of the Arvada Kiwanis Club and the Arvada Chamber as well as City Council liaison to the Arvada Visitor’s Center, Audit Committee and the Arvada Fire Board as well as Vice Chair of the 2021 Arvada City Charter Review Committee.

Lauren and her husband Steven, a Colorado native, were looking for the right place to settle before starting a family. It took only one lunch in Olde Town Arvada for them to decide that this was where they wanted to be. All these years later, Lauren and Steven are still in love with this community and cannot envision raising their daughter, Tabitha, anywhere else. They’re also “fur parents” to dog (Zoe) and two cats (Simon and River). The family stays active at the APEX Center and can frequently be found patronizing everything Olde Town. 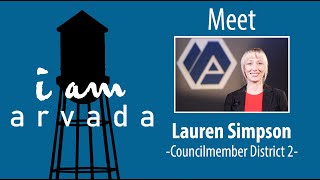