Marc Williams was first elected as a Councilmember At-Large in November of 1999 and was re-elected twice to that seat. He became Arvada’s 34th Mayor in November of 2011, and was re-elected in November of 2015 and for his final term in 2019. His involvement in our community began in 1979 when he was hired by the law firm of Sonheim and Helm as a second year law clerk while attending the University of Colorado Law School.  When Mr. Williams became an associate with the firm in 1982, he became active in both the local bar association and the Arvada Chamber of Commerce. Both of these organizations gave him the opportunity for community volunteerism and a feel for the community and its issues.

Prior to his city service, Mr. Williams served as President of the Northwest Metro Chamber of Commerce and the First Judicial District Bar Association and as a Trustee for ten years on the Jefferson County Library Board, two years as its Chair.

As an elected official, Mr. Williams has been active at the local, regional, state and national level. He was a founding director of the Arvada DARE Foundation, has served on the Arvada Economic Development Association Board, the Jefferson County Economic Development Council Board and the First Judicial District Community Corrections Board. He was first elected to the Executive Board of the Colorado Municipal League in 2006, and served as President of CML  in 2013-2014.  Mr. Williams is the 2020 Chair of the Metro Mayors Caucus, and serves on its Executive Committee.

At the national level, Mr. Williams also served on the National League of Cities Policy Committee for Transportation and Infrastructure along with the First Tier Suburbs Committee. Marc was voted 2011 Elected Official of the Year by the Jefferson County Economic Development Corporation. In 2014, he received the Chairman’s Award from the Arvada Chamber of Commerce.

Williams states that one of his most rewarding professional experiences was mentoring as an attorney coach to the Evergreen High School Mock Trial Team, which won three state championships and the National Championship.

Mr. Williams is married to Luanne Williams, the Executive Director of the Rocky Mountain Children’s Health Foundation and the Mother’s Milk Bank, which is located here in Arvada. Mr. Williams expresses great fortune in having a wife who shares his passion for civic involvement and politics. They enjoy the process and the debate, and share a common belief in the free market system with responsible, limited government. The Williams have four children and eight grandchildren who share their passion for hiking, reading, cooking and burning marshmallows over campfires. The Williams also enjoy their “down” time with many miles on their tandem bike, golf, hiking and travel. 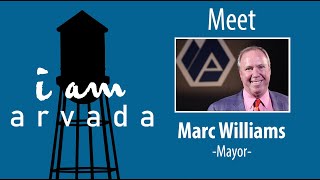