Schooling in the area actually began in 1863, in a log cabin on the John B. Wolff homestead.

In 1869, Benjamin F. Wadsworth donated land for a frame schoolhouse, and in 1882 the wooden structure was replaced with a brick building. The school was located at 5650 Olde Wadsworth Boulevard between Grandview and 57th Avenue, teaching students through 1920.

After 1920, it became a commercial building with a new façade. However, in 1999 during the Olde Town renaissance project, the schoolhouse was uncovered and the front restored to its original appearance.

In 1900, a new school building was opened on Zephyr and Grandview. The Arvada School, as it came to be known, has been in continuous use since, surviving additions and remodeling. The building was renamed Lawrence Elementary School in 1955.

In 1920, the first bricks were laid for the modern-day Arvada High School, still proudly standing on Wadsworth Boulevard.

In 1922 Thomas D. Vanderhoof joined the teaching staff, teaching vocational agriculture and welding. He is remembered as a visionary and a mentor, and Arvada's first honored coach. Baseball, football, and basketball flourished under his leadership.

On Monday, December 8, 1941, the day after Pearl Harbor was bombed by the Japanese and the United States entered World War II, Arvada High School Principal Ray S. Fitzmorris called a school assembly and said to the boys, "You seniors are going to start this war and you freshmen are going to finish it." 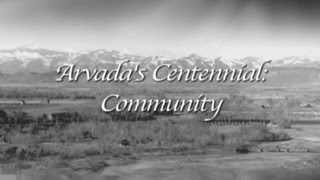