May 2016... Life has returned to normal at Tucker Lake! The only work left to do is the construction of the drainage way in the event the lake needs to be drained. The repairs to the south dam are functioning as designed. There are no plans to stock the lake with fish. This is an irrigation lake which could be, in the event of a severe drought, drained due to water irrigation calls. However, over time the lake does manage to populate itself with fish, and bank fishing (with a fishing license) is permitted (no boats).

March 2016...The end is in sight for the Tucker Lake project. Late last fall the City completed draining Tucker Lake. We had assistance from the media to get the word out to harvest the fish that were in the lake. We began working with the State Engineers office to get approval on our repair plans to the dam face and the work required to line the outlet piping.

We were very diligent in our approach to the type of repairs needed, planning, and timing. Although we had a couple of setbacks, such as high winds and dry conditions, the good news is that our contractor has begun work on the “chimney drain” on the dam face which will ensure that if water seeps through the earth dam it will not erode soil which could lead to a dam failure. We will then install the lining in the outlet piping. Once this work is completed we will move ~ 400 acre feet of water into Tucker Lake to ensure the lake bottom is covered with water, eliminating dust issues.

August 2015...Tucker Lake, located just north and east of the Arvada Reservoir, will be completely drained over the next few months in order to repair a seepage issue as well as bring the irrigation outlet up to State Dam safety standards.

Tucker Lake is an approximately 150-year-old reservoir; its water source is Ralston Reservoir.  When West Woods was developed, Tucker Lake became the irrigation source for the golf course.  As more development has occurred in the area, a trail was constructed around the Lake.

Since early 2014, utilities staff have been monitoring a seepage area high on the south side of the Lake.  In June of 2015, staff noticed that the seepage area had expanded and the slope potentially becoming unstable; therefore, in July, Tucker Lake was lowered from approximately 15 feet to 12 feet to bring the water level below the area of concern.

In addition to the seepage issue, the pipe outlet used to irrigate West Woods Golf Club needs to be relined in order to meet State engineering standards, requiring the Lake to be completely drained.  This will occur during the fall and work will commence on the pipe outlet once the ground is frozen.  Repairs should be completed by March of 2016, at which time the Lake will be refilled.

Residents with fishing licenses are encouraged to help "fish out" the lake prior to draining.  The Colorado Division of Wildlife has lifted the limits for this particular case. 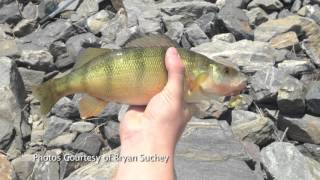