On Saturday, August 19, 2017, Arvada volunteers were recognized for their service to the community at a banquet held in their honor at the Arvada Center. The banquet theme was "Super Heroes."

Arvada volunteers serve tirelessly in the community, contributing in ways beyond measure. Their roles include serving on citizen boards and commissions; planning and organizing festivals; volunteering with the Arvada Police Department, the Arvada Reservoir, and Majestic View Nature Center; and much, much more.  On average, there are about 500 people in our community who volunteer at least 32 hours to the City each year, equating to some 16,000 hours of service that save significant taxpayer dollars.

Approximately 150 volunteers attended the banquet and several members of the Arvada City Council and staff were present to honor them. Arvada Police Senior Liaison Detective Chris McCoy was the guest speaker.

Just a few of our many City of Arvada volunteers 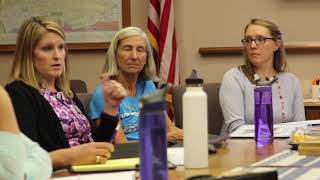